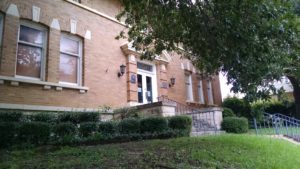 Our Carnegie Library, like 1,679 other Carnegie Libraries in the United States, gets its name from Andrew Carnegie. Carnegie came to America from Scotland  at the age of 13, and over the course of his life would become one of the richest men of his time. Making his fortune in the Steel Industry, Carnegie acknowledge education as the foundation of his success and wanted to share the opportunities he had through education with others across the country and overseas.

In total, Carnegie helped build over 2,500 libraries, and our library can proudly count itself among them. Although Carnegie was very generous in his funding of libraries and other philanthropic areas, he was still a businessman at heart, and as such, there were certain stipulations he required be met before he would build a library.

The two major requirements were as follows:

With requirements like these, it’s no wonder why his Free Library Application held questions about taxes, expenditures, and the like.

Tyler’s Carnegie Library was built in 1904 and served the public in this role until 1980 when the new library was built directly across the street. The 1904 library can boast quite a few fun historical facts:

The Smith County Historical Society has resided within this historic building since the mid-1980’s. We take incredible pride in preserving and protecting our local history and it is a great honor for us to do this from such a historic site.