Dear Mama and All:

I guess it is possible that you will be worrying about me as it has been about a week since I have had time to write. I left “D” barracks Tuesday and have been so busy since I arrived at the main barracks. I have hardly had time to think of home.

I am at the Army and Navy Y. M. C. A. in Frisco and have shore leave for thirty-six hours and I intend to stay over and loaf the full time. 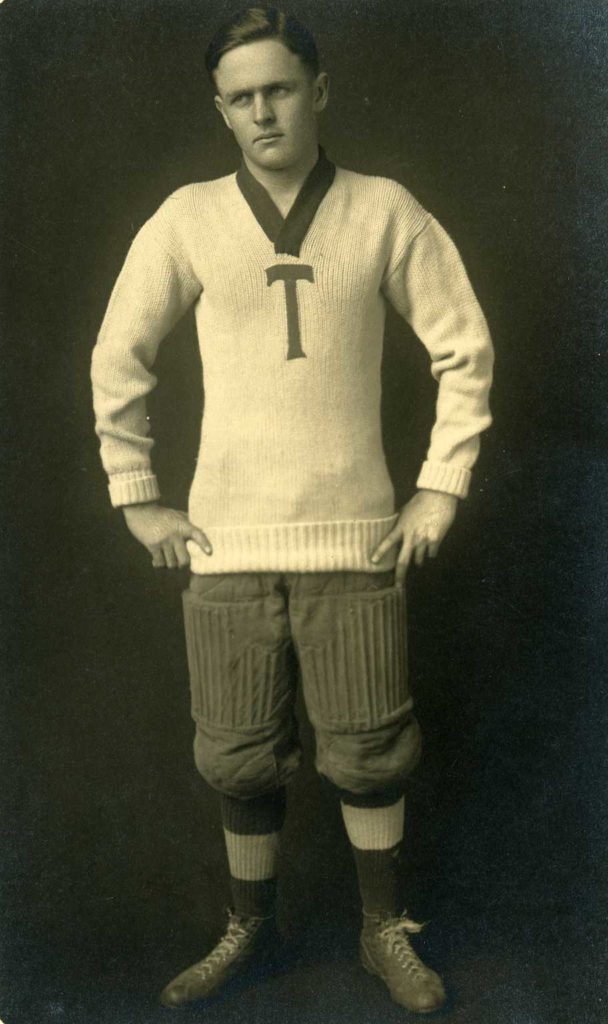 Capt. Nat Gentry, from page 81 of The Alcalde.

You wrote about going to “retreat” and I want to assure you that it is nothing to compare with “colors” here on the Island. At eight in the morning and at six-thirty in the evening all of the seaman companies are lined up and when the “Star Spangled Banner” is played they all stand at attention. All of the men in the trade companies come to attention whenever they may be. There are over five thousand men on the Island and two or three hundred civilian carpenters. When you look around and see several thousand men on tops of building, in boats, and in every imaginable position, standing at attention, it instills a feeling in you that makes you think you are just a small part in the war game. You get to where you feel that it doesn’t make such a difference what becomes of you as long as you go under serving the Flag.

Ten of the boys from Texas went to a matinee in Frisco at the Orpheum Theater the other day. The last thing on the bill was the “Maryland Singers” and for their closing number they sang “Dixie.” When the orchestra struck off into the strains of old “Dixie” we came to attention and stood at salute the same as when the “Star Spangled Banner” is played. For a minute nothing happened, then they started to clapping all over the house.

Recruits are coming in thick and fast now and I ran into Wiley Sims of Mineola, a few days ago. They have been coming in at the rate of about one hundred a day now.

One day we fed eight hundred and ten men and the next day one thousand one hundred and fifty six. We have not room in the mess halls and have “second mess” in two of them.

You have enjoyed the jokes about the “rookies” at Leon Springs and here is one that happened out here that beats them all: A rookie who had been here only two days failed to salute a gold braid, or commissioned officer; and the officer said:

Our company, the Seamen Guard, left “D” camp Tuesday afternoon and came down to the main barracks where we were placed in the tenth company. This is a regular drill company, and it was necessary to place us in it as there is no room in the Yeoman school.

Mr. Medovitch wanted me to stay in “D” camp as his yeoman, and he secured the consent of Ensign Metters, but I decided that I had rather live at the bottom of the “Hill.” And so here I am and will be givens regular military and boat drills for about two months.

The first day I was in main barracks I was placed on the paint squad and worked at that all day. I was quite a come down from commissary yeoman but even at that it was not so bad.

Thursday I was put on the pivot of the second squad in the first section and drilled for eight hours. We drilled all Friday morning in preparation for a big parade which Frisco gave her second quota of drafted men.

At one-thirty yesterday afternoon we left the Island and came over to Frisco where we formed the parade __ here was an entire battalion of “Jackies” with an eighty piece band and a fifteen piece bugle squad. There were about a thousand soldiers and marines who where in front of us: but when the band played “Good bye Broadway, Hello France” and our entire battalion started singing as loud as we could, they forgot all about the soldier and went wild over the “Jackies.”

We marched from the Ferry up Market street to the City Hall, filed thru it, out in front of Exposition Auditorium, where the Mayor presented the men with a flag.

Gee! but it was great marching up Market street with the girls throwing roses at you!

The drilling is hard and I practically gave away in the parade, due entirely to my bad foot. This morning I went to a doctor and when he saw it, he cursed the doctor that let me in the navy; but said that as long as I was here he would do his best to help me. It is probable that he will operate on it soon.

I slept in a hammock for the first time Tuesday night and it was quite an experience. I like it better that the cots in “D” camp. I slept better than I have sine I reached the Island, except that once in a while thru the night, I would be waked up by a dull thud and everybody would burst out laughing as it signified that some “rookie” had hit the floor with a drop of about six feet.

There is only one objection that I have to it and that is that you cannot go to sleep until “Hammocks” are “piped down.” At nine each night, they “pipe down for ‘Hammocks” and each company forms under where its hammock is stowed and remain there until one blast from the bugle, when they march upstairs and form in two ranks opposite the hammocks and facing the “officer of the deck.” At a signal everyone grabs his hammock and carries it his nooks. He has five minutes to unlash it, string it up, and get in bed.

At five-thirty in the morning reveille is sounded, and the officer cries out “Hit the deck.” And take it from one who knows, you have to “hit the deck” in a hurry to dress, lash up your hammock and carry it up a big hill about a quarter of a mile away. You place it on a rack and leave it to air doting.

I will appreciated it if Papa would stop by sometime and give my regards to Mrs. Medlin and to Mrs. Murray.

I will write sometime next week and tell you more of life in the Main Barracks.

This is the 2nd letter that has been published from Nathaniel “Nat” A. Gentry, Jr. The first letter was published August 25, 1917.

In the Article “1900-2000, A Century of Growth For Smith County and Its Lawyer Population” by Alex Beall on page 21, there is a biography on Nat Gentry, Jr.that says “Date:State License: 1919, WWI, First Presbyterian Church; Attorney of the Court of Criminal Appeals; Attorney for State Banking Commission.” The license date of 1919 contradicts what was published in the Memorial that was published in Texas Bar Journal 1949 Volume XII, Issue 10, page 524 accessed on-line at www.texasbar.com on May 23, 2017. The memorial states “he studied law at his father’s office and was admitted to the bar in 1915.” I believe that the 1919 date is more credible.