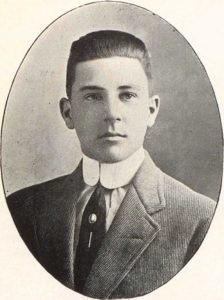 The following letter from Levin Jester, son of Mr. and Mrs. L. L. Jester, former residents of Tyler, will prove of especial interest to the many friends of the family in Tyler, Levin Jester is a graduate of the Tyler High School and well Known here. The letter was written from Brest France where his ship is now detailed.

Young Jester enlisted in the United State Naval Reserve more than three months ago and was assigned to a “sub chaser.” Following is a description of his experience in his own words.

“We sailed from New York June 5, and went down to Bermuda. We had target practice and drills daily. Bermuda is beautiful, After coaling and painting ship, we departed from the Azores – Ponta Del Garda – which is a very beautiful place. I didn’t care very much for the Portuguese, but the land looks awfully good after a rough sea voyage. Seeing the world through a porthole is very nice when there isn’t any war, but it’s a different proposition now.

“Naturally enough, our trip from the Azores was very severe, due to the fact that for seven days half of the crew stood watch while the other half slept. The shifts are divided into four hours each. In short you work and watch for four hours and then ‘turn in’ four hours. I wrote you of the bunker fire and the terrible effect it had on some of the crew. However, I resisted the strain fairly well and was mighty glad to help save the ship from burning at sea.

“Our course was rather odd into Brest, as the harbor is full of channels, etc. We came into port on the Fourth of July. Just think! The French are very lovely and appear to love Americans. In fact, they generally shout at you on the streets, ‘Vive Americano.’

Into Bay of Biscay

“After resting up from this last trip, we cruised out from Brest into the Bay of Biscay. If you rec all that body of water, is noted for its roughness. What a sea! – with everything in the ship awry. One of the strongbacks gave way, causing one of the lifeboats to take a fly. It was soon tamed down and made secure. One of the tables in the mess-sleeping-eating quarters broke loose, deciding to walk around the deck, with an escort of dishes, spoons, raincoats, and clothes in general.  To add to this some of the boys got seasick, and forty men in a small place is no joy especially when some one is sick. Of course we had to eat out of plates standing up. Another very unpleasant thing was weather – rain, rain, rain, with the wind blowing ninety miles per. Climbing into the crow’s nest with the old mast creating an arc of 90 degrees and the wind trying to blow you off the shrouds is not as nice as a meal at the Adolphus. The worst thing is the lack of sleep. Naturally we sleep in our clothes and have our life preservers as pillows.

I had the delightful excitement of acting as helmsman through the mine-strewn waters. We zigzagged, dodged and chased. Quite thrilling! One night we were convoying an English ‘tramp’ to port when about midnight the wake of a torpedo was seen. The other ship opened fire and later we did, also. Can you imagine both guns on the portside firing with such violence as to shake the whole ship, and our ‘tramp’ doing likewise. The flash across a black sky, a pause – then an explosion as the shell hits the water, causing a great geyser and hot sea water to rise up. The firing lasted for quite a few minutes, but we never knew whether we hit the submarine or not. I see very clearly that if we are engaged there is nothing to do but keep calm and wait for a nice soft spot in the water to embrace you – dead or alive. Strange thing-we joke about the whole affair – to down to our bunks, fall in and sleep like logs, trusting to the inaccuracy of the Germans and to the accuracy of our men and watch. No one slacks. There is too much at stake.

I forgot to state that just after we left the Azores, the town was attacked by the German subs. Evidently they waited until we cleared out. If one comes in contact with danger long enough, one gets fearless, which is best. Of course, it is folly to be careless. Owing to the fact that there are so many floating mines. I would not advise a trip across the ocean for a few years. I figure we can lick the Germans if we get open battle, but they fight under water, which makes it harder for us.

The work at sea is so hard that I understand the Admiral of the fleet has given orders for no work at port except that which is absolutely necessary. I am glad of this.

All the hardships were forgotten by this one incident. One terribly rough day we sighted three boats. We approached and found that those in the boats had been torpedoed. We took them aboard – sixty-seven of them, soaking wet, cold and hungry. They had seen in the water seventy hours. One nearly died. I dare say the saving of sixty-seven lives will certainly be worthwhile if we do nothing else for the remainder of the war. I had a long talk with one of the survivors. He told me the Germans took his pictures from the submarine deck, telling him not to be caught again. Quite a system, eh? My duties are numerous. I have a one-pounder of my own, work as painter and sightsetter. I was put later as Gun Captain. I trust I can someday hit one of them—-subs. I enjoy letters more than anyone can imagine.” 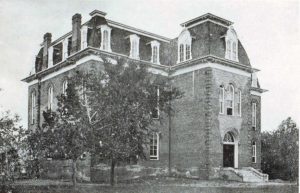 From the 1909 yearbook of Tyler High School:

Little brother of the renowned Jno. Jester has for a number of years spoken as one of authority on all matters which concern no one. As a lexicographers he is marvelous, he can sometimes coin as many as six new words in a day. Almost the best Latin and Chem. pupil of the Tyler High School. Owns and navigates Laboratory desk No. VI, by means of which he has won a reputation.
He came out with Fifth Honor when he graduated. Quarterback in T.H.S. Football team, member of T. H. S. A. C., a T. N. S., President Senior and Poet Laureate T.
He attains whatever he aims at.”

He graduated from Yale University in 1913.

He was an ensign with the U. S. Navy during World War I engaged in convoy duty. Leven Jester married Joanna Mazro in 15 December 1925 in Houston, Harris County, Texas. At his death in 1951, Joanna is not mentioned in the several obituaries that are found on Ancestry.com so I believe that they divorced sometime before his death in 1951. 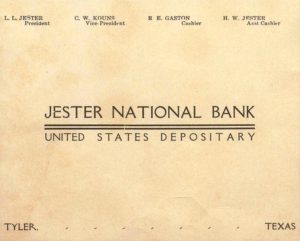