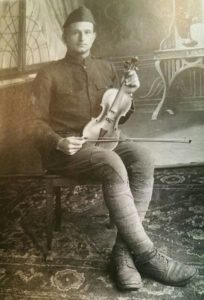 Company L, 359th Infantry, Camp Travis, Texas, Oct. 13. Mr. F. W. Bowron, Tyler, Texas, Dear Sir: – I have been so busy since I have been down here that I haven’t had time to write. I am now appointed Company Clerk for the 359th Infantry, which I am Very thankful for I have sure been busy all the while since I have been down here. For the first two weeks I was down here, I drilled all the time and worked in the office between rest periods,  but now since I have been appointed clerk, I don’t have to drill any at all: that is, I haven’t so far. Last Wednesday a week ago, October 3rd, we all took a hike (10 miles) and, believe me, I was sure some tired before I arrived back in camps. My feet felt like they would weight 50 pounds each, but all of our company made it through alright. However, there were lots of them in other different regiments that fell out on the way side, and were picked up later in the ambulance. There were about 3000 of us on the hike. We went through one of the most beautiful parks I ever saw, it had almost any kind of animals in it that you could imagine, and all kinds of different fowls and birds. The company went on another hike last Wednesday, the 10th, for a 9 mile hike, but I did not have to go on that one, on account of being clerk, and had to remain here to take care of the office.

I am a little school boy again. I have to go to the clerks’ school every evening at 1:30 and dismissed at 4:30 p.m. It is sure fine. I am well pleased with it. I never get tired of going to school.

I am down here a little “Soldier Boy” and like it just fine. I never dreamed that I would like it as well as I do, but you see you can never tell until you take a shot at anything. 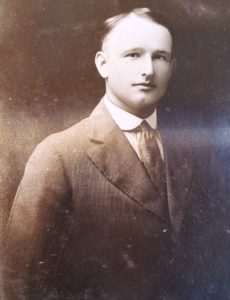 Luther Wilburn Thompson was born on February 1, 1892, in Rusk, Cherokee County, Texas. His father was Benton Swinney Thompson and his mother was Mary Jane “Molly” Jones. On June 5, 1917, he was living at 413 W. Elm, Tyler, Texas and was employed by St. Louis & SW Ry Co. of Texas as a stenographer clerk. He was inducted in the service on September 19, 1917 at Tyler, Texas in the 359 infantry, Co. L. of the 90th Division. He departed Brooklyn, New York on the Elpenor for Frances. He participated in operations at St. Mihiel and Meuse-Argonne. He returned on the U.S.S. Wilhelmina boarding at St. Nazaire, France that left on 22 May 1919 and arrived at Newport News, Virginia on 7 June 1919. He was discharged from the service on 7 June 1919.

Miss Vera George, the talented daughter of Mr. and Mrs. D. H. George of Ola, and Mr. L. W. Thompson of Tyler, Tex., were united in the holy bonds of matrimony last Sunday evening at the home of bride’s parents, the ceremony being performed by Rev. Jackson of Havana. The groom holds a responsible position in the General Offices of the Cotton Belt Railroad in Tyler. Immediately following the ceremony Mr. and Mrs. Thompson left over the Rock Island for an extensive bridal tour of the West.  They will visit Oklahoma, Texas, Nevada, Arizona, Utah, Wyoming, Colorado, and Missouri.

Thank to Kathryn Case, who is Luther’s granddaughter, who posted the original pictures used on her Facebook page and gave her permission for us to use on this blog.